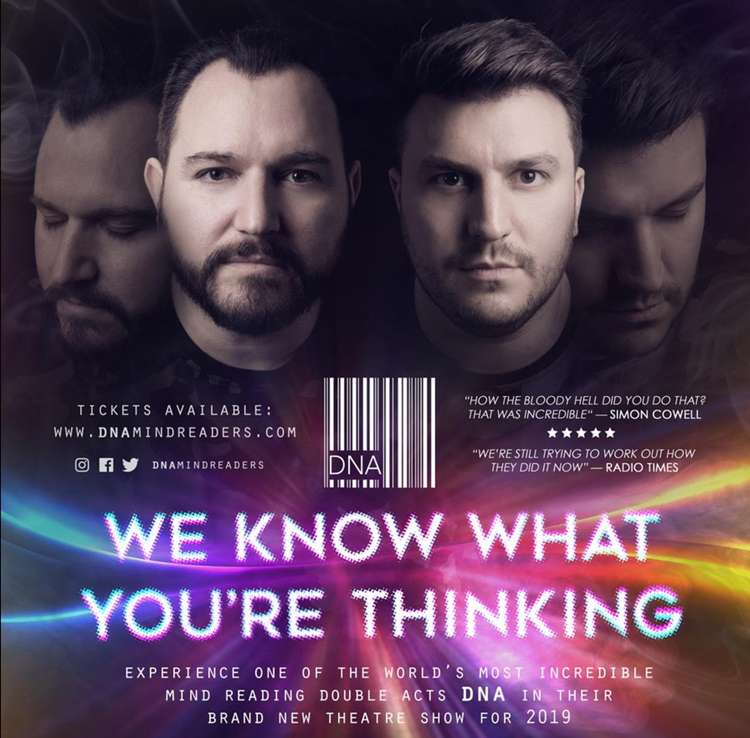 
Entry Requirements: 14+ under 16s to be accompanied by an adult

Following their astounding appearances on the eleventh series of Britain’s Got Talent in 2017, mind reading duo DNA are taking their brand new show called We Know What You’re Thinking out on a UK tour from 6th February – 29th March 2019. Tickets are on sale now. Andrew and Darren, best known as mind reading double act DNA, took the nation by storm when they appeared on Britain’s Got Talent in 2017 with their incredible telepathic ability known as "The Gift". Wowing the judges, live audience and viewers at home, the duo went on to reach the live finals of the hit ITV talent show. Their first audition has reached almost 10 million YouTube views alone. Performed completely live, they can ask volunteers to concentrate on the name of celebrities, telephone numbers, credit card numbers, a word in a book, the name of the street they grew up on, a relative’s name... literally anything. With devastating speed and accuracy, the pair are then able to reveal what that name, number or word is, every time. Their unique mind reading performances have now been enjoyed by tens of millions of people around the world. Aptly named ’The Gift’, the duo have created a show that will blow minds and prove that the impossible really is possible - but only for them! This brand new show features world exclusive, never before seen material that is being showcased for the very first time! Now their incredible talents are being taken out to venues across the UK and will be coming to a venue near you in February and March 2019, so book your tickets now

Ahead of their 2019 UK Tour, Andrew and Darren said: “Our audience is the most important part of our show. We want everyone to leave having had a great time and feeling like they’ve experienced something totally amazing” “We’re so excited to share what we’ve spent so much time working on. We’re going to be performing brand new never before seen material that will make our audiences question everything they’ve seen before… We can’t wait!” Praise for DNA: “We’re still trying to work out how they did it now” ★★★★★ Radio Times “What you do, honestly, is incredible.” Simon Cowell “DNA left the judges speechless with their jaw dropping mind reading act” ★★★★★ The Sun